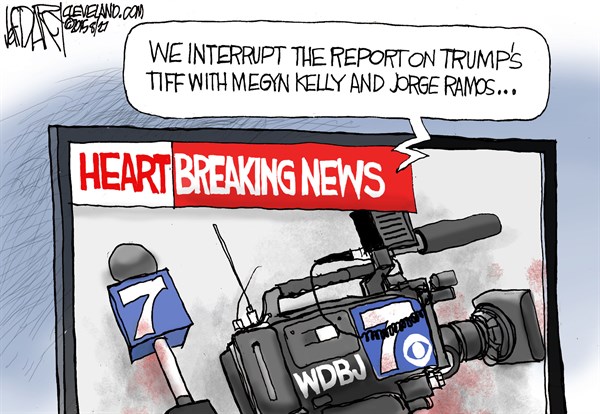 My heart goes out to the family and friends of the two people killed at WDBJ-TV, fatally shot during a live-to-air yesterday. As a veteran broadcaster and no stranger to public appearances, I can tell you this is everyone’s worst nightmare.

I had a stalker for years who showed up at random appearances, inundated the newsroom with phone calls and sent me thousands of letters with millions of tiny cut out pictures of penises. It turned out he was off his meds and I wasn’t the first victim of his obsession. It took a couple of court cases before he moved on. He may have but I never really did. Not going anywhere without a cellphone. Always looking over my shoulder. Refusing opportunities for higher profile positions. He left an imprint on my life and I never really felt safe again in public. It was easier to hide behind a microphone in a studio.

I have the utmost respect  for people who can go live-to-air whether it’s in front of a studio audience or doing streeters. It takes a special kind of poise to tune out the nuts you know are making rude hand gestures behind you or shouting filthy words or just generally trying to throw you off your game. Add to that the now confirmed real possiblity of being physically harmed and I have to wonder if news directors will pull back on live-to-airs in the name of safety. You couldn’t blame them or talent for having legitimate concerns.

I know that someone will use this story to craft a novel–the twist of social media as a way to enhance modern day violence is just too ripe. I just hope we all wait a while.

They say that time plus tragedy equals comedy but that’s patently untrue is so many instances. Some things are just so wrong, so sad, so unredeemably evil that it’s hard to imagine anyone making a joke out of it.

That being said, my dad used to laugh his head off at “Hogan’s Heroes.”  Go figure.