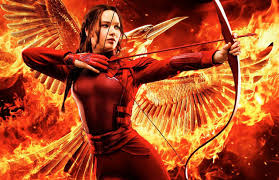 The last Hunger Games movie is now out. Critics have dismissed it as darker than the rest; others have said they are over the whole thing. That’s kind of the risk you run when you split a book into two parts. The producers and director maintain they had no choice, that there was still too much story to tell to cram into a single movie. Audiences will decide in the end. It’s already tracking lower than the previous films. It really doesn’t matter because the franchise has grossed billions and made a star out of Jennifer Lawrence.

The trilogy has also made a star out of author Suzanne Collins. She started out writing for kids shows and then kids books and put in the time and learned her craft before striking it rich. How rich? One estimate is that she’s made $65 million off of The Hunger Games. Good on her. She’s a good writer and once you break that down into a pay-per-word basis, it’s really not that much. Plus she’s grateful and she knows how lucky she is to have hit the right cord at the right time with the right audience.

So much of success and failure is timing. Would EL James be a multi-millionaire if she’d written Fifty Shades of Grey even three years earlier? She needed a Twilight fan fiction base to give her that initial boost. Plus the rise of e-readers meant people who may be reticent about picking up a hot novel in public could do so with impunity. (Some would also argue that there are lower expectations for fan fiction and erotic books when it comes to grammar and pacing and plot. I don’t know if I agree since there are terrific–and terrifically bad–writers in every genre.)

I guess it’s like that the old adage about luck: it’s when preparation meets opportunity. James and Collins and The Martian‘s Andy Weir had an idea and followed through despite their other commitments and struck gold.  At the same time, millions of writers are plodding away with little or no payback. Some of them may be great but we’ll never know because wading through all the novels out there is impossible.