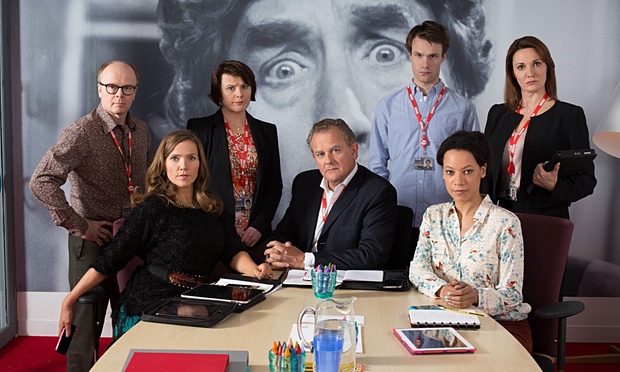 I am a huge fan of British television. There seems to be a better overall interest in quality writing. Or at least that used to be true before there was more time and respect given to television in the US. It now arguably attracts better talent than the movies.

My favorite UK series of the moment is called W1A. It’s on Netflix. It’s my palate cleanser after Making a Murderer. There are four episodes the first season and then five in the second. They are hilarious but they may require some pausing or second viewing to understand the different accents and all the stuff going on in the background.

It’s set in the BBC and stars Hugh Bonneville of Downton Abbey. Somehow David Tennant does the narration without swallowing his tongue. It’s about the BBC and the writers…as they say…are taking the p***. There’s a Director of Values, A Director of Better and meetings that go on forever but nothing is ever resolved. You don’t have to work in broadcasting for this to strike a chord. All of us have worked places where people talk and say nothing and at the end of the day you wonder what the hell did I just waste all that time on?

What makes it even better is the fact that it’s so close to reality inside the BBC. Not only do they film in Broadcasting House in London but they make fun of some of the key personalities…like the Monday morning damage control meeting usually dealing with “Mr. Clarkson.” (Not any more but still a good joke.)

One ongoing plot line is the rebranding of the BBC and efforts to make the logo more ‘appy’. (That’s not ‘happy’ without the ‘h’, it’s ‘appy’ as in an app for your phone. )

Get this. One of the arms of the BBC is launching a new logo that is very appy.

Also, I just found out there’s a prequel to this called Twenty Twelve in which the Hugh Bonneville character is Head of Deliverance of the London Olympics. It looks brilliant and we’re ordering the DVD because nobody is airing/streaming this in North America.

2 thoughts on “What To Watch After Making A Murderer”