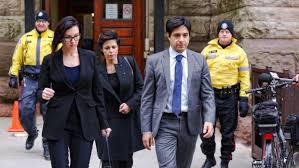 The Crown’s case against Jian Ghomeshi lay in tatters this morning. The third woman never told police she had sex with Ghomeshi in the days after the alleged attack. Well, it wasn’t sex, she said. Sex means intercourse. This was just a handj**. A flashback bit of Clintonian legal logic. Oh, and she didn’t lie when she didn’t elaborate about her relationship with witness number two Lucy DeCoutere. It wasn’t a lie, it was an omission. We’re talking 5000 emails in which they cackle about sharing popcorn at the trial and making him pay.

I like a good revenge as much as anyone but has no one heard of collusion? Even if you aren’t legally savvy, surely you have some common sense. And it’s not as if they didn’t know they shouldn’t be in touch or reading about the case in the media; they knew, which is why ‘they omitted’ saying anything until the very last second.

You know police and the Crown are going to be slammed for not knowing about all this and letting the case fall apart. But what do you do when your own witnesses ‘omit’ the truth? Even the experts who’ve been defending the post-attack love letters and flowers and sexy pictures and half-remembered details, blaming that on a kind of PTSD or the ritual of trying to normalize violence, will have trouble explaining these ‘omissions.’

A couple things come to mind as we wait to find out if a 4th alleged victim will take the stand today: 1. Marie Henein hasn’t had to be Perry Mason brilliant. She just needed a couple of staffers to do some online grunt work and check out the witnesses’ social media, digital footprints and go through her client’s archives. Did Ghomeshi throw nothing out? Actually, there is one fascinating story going around that he purposely kept all correspondence in order to protect himself against assault allegations.  2. It was that same social media that led Ghomeshi into trouble in the first place. He was worried a former lover was going to go on Facebook and accuse him of assault. Then there was the follow up Facebook posting explaining he liked the kink. (Consensual, of course.) He lost his job after sharing a video with his bosses at the CBC which was supposed to display the consensual nature of such relationships. Big Problem–The Supreme Court has ruled you can’t consent to being injured so BDSM is essentially illegal, especially if it involves choking and slapping.

The bottom line is that the case is a mess and Ghomeshi will probably walk. It was never a sure thing because of the lack of forensics and the high standard of proof required for conviction.

The witnesses have been tainted. Some will argue that’s typical in such cases and warn this will scare other victims in other cases from coming forward. Or, it could make the police and Crown less willing to prosecute. Either outcome would be a shame and for that, we can’t blame the defendant.

By the way, Christie Blatchford’s column in The National Post is a piece of brilliant writing.