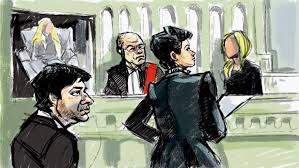 But belief is not enough for a court of law. Nor should it be. There is a burden of proof and unfortunately, given the passage of time, there was no forensic evidence. So it came down to the credibility of the witnesses. The judged deemed that to be specious and voted for acquittal.

As an avowed feminist, that is a tough pill to swallow and yet I am somehow thrilled at outcome. It means that no matter how famous (not that famous, not even in Canada), no matter how important (not that important,  not even in Canada) people accused of sexual assault can be held to a legal standard.  Therein lies the rub. The legal standard is not the civil standard otherwise OJ Simpson would be behind bars for murdering his ex-wife and Ron Goldman. The burden of proof in a criminal case is much, much stronger and I take solace in that. I want people who are sentenced to time behind bars to be unequivocally convicted of their crime.

That was not the case in Jian Ghomeshi. I would not have been among the women protesting outside the courtroom because the complainants failed a simply test–did they tell the whole truth and nothing but. No. Unfortunately. You can blame PTSD. You can blame faulty memories after so many years. But you cannot blame the court system because they were given every opportunity to tell police and the Crown about each and every interaction they had with Ghomeshi–before and after the alleged assault. I believe there was an assault. I believe there were many assaults. I believe there is a pattern of behaviour here that speaks to a deep-seated misongyny but I don’t fault the judge for questioning the veracity of the victims. Not after two colluded via email. Not after they all sought out their alleged attacker following said attack.

Now, you my question my feminist credentials but I have been there. I have been in court testifying against a man who stalked me for years, terrified me, hampered my career. I understand how upsetting it is to be on the witness stand, how the entire system feels tilted against you. I told the truth and nothing but. In the end, the judge believed me and the perpetrator was sent to a facility for ….a while. He’s out now and no doubt off his meds, stalking someone else.

Jian Ghomeshi has lost his national platform. You have to understand for a narcissist, this it the worst verdict ever.

4 thoughts on “The Jian Ghomeshi Verdict.”