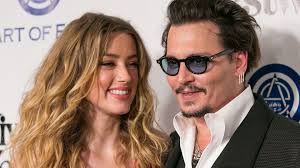 Another day, another accusation/revelation in the Depp divorce. Today’s is from Amber’s camp and a friend says back in December Depp tried to suffocate his wife with a pillow. Yesterday’s was from Johnny’s camp and the bodyguards denied Johnny was close enough to have struck his wife on the night of the cellphone incident.

I still have no way of knowing who is lying but the drip-drip-drip of accusations can’t be good for Depp. Amber is enough of a nobody in Hollywood that this won’t impact on whether or not she’s hired unless she was on casting director’s radar simply because of her spouse. I don’t know. She beautiful and was funny on Top Gear but not much of an actress.

From Hollywood to Washington and the gloves off, bare knuckled brawl that is the fight for the US presidency. (Should I, as a feminist, be happy that Donald won’t take it easy on his female rival?)  We know it’s gonna be ugly. He’s called Hillary an enabler for her role in Bill Clinton’s serial cheating. He’s called her a liar. She’s called him a misogynist. There’s actually a fair amount of truth in all these accusations.

What I was thinking about is how the private has become public.  The Kardashians are one of the biggest brands in the world because they let us into their “real” lives. There used to be gatekeepers, publicists and enforcers.  Now there’s Instagram and Snapchat and oversharing.

Ironically, a lot of this can be traced back to Bill Clinton and the blue dress and the cigar and boxers v briefs and is oral sex sex. The Lewinsky scandal made the Drudge Report and we all started going online for news the networks and print wouldn’t cover.

Now we live online and there is no such thing as a private life.