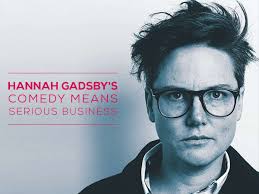 I hope you make time to watch Nanette on Netflix. It’s a stand-up comedy special by a Tasmanian woman by the name of Hannah Gadsby that’s getting great reviews.

What’s really funny is….it’s not funny. It clever and bitter and heartwrenchingly real. It’s also a master meta class in comedy. That last bit sounds pretentious and boring but the show isn’t . Hannah takes apart what makes a joke- a set up and a punchline. Tension, then release.

She has a great point about laughter being contagious but warns that so is anger.

She also talks about self-deprecating humour. Women get this all the time. Can’t you take a joke? Oh, you’re so sensitive? That’s a typical response when someone says something about our weight or our looks or asks if we’re having our periods. The someones who say these things aren’t just men. Women can be just as misogynistic, perhaps as a way of courting favour with those in power who, let’s face it, are traditionally men.  In my part of the world, white straight men.

Hannah talks about that too in Nanette and offers advice to white, straight men and I have to confess that made me a bit uncomfortable. Is it like mansplaining in reverse?

Now if you are going to watch Nanette, and you really should, watch with a man. I watched it with my husband and he was uncomfortable. While I thought it was brilliant and thought provoking and fill in adjective here- he was uncomfortable.  He didn’t recognize himself in the description of white straight men or of the patriarchy.  He doesn’t talk down to women.  He doesn’t take sexual liberties.  He’s a good guy. His friends are good guys. Nice people- no gender qualifier needed.

It strikes me that maybe it’s time for #MeToo to take a bit of a breather.  The initial high of outing the abusers has eased. Harvey’s charged. Louis CK has disappeared. Charlie Rose’s comeback has reportedly fizzled. Matt Lauer is unemployable.

I remember when Al Franken resigned.  I had liked him, thought he seemed like the conscientious public servant. Then the groping allegations surfaced and I was okay with him going away. I still am…but I also regret that I dismissed any qualms I had about him and other men who were jerks and asses but lost careers and reputations for non-capital crimes with a shrug and a “collateral damage” and a “you’ve got to break a few eggs.”

I look at my husband and think of my dad and my brothers and all the good men I have known in my life, all the good people and I wonder.

Watch Nanette. Have a think and a conversation and let me know if you wonder too.