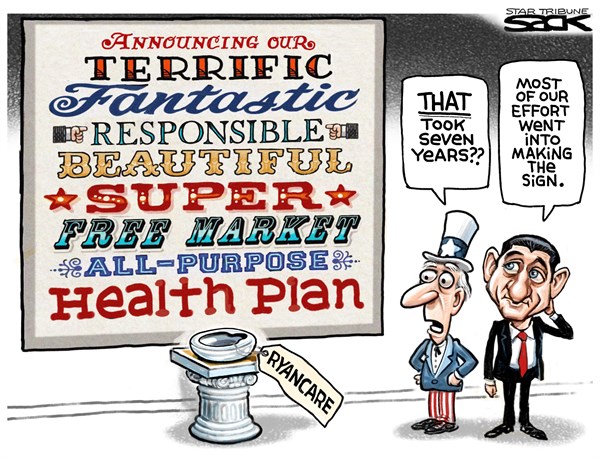 Donald Trump says he didn’t promise to get rid of Obamacare in 64 days but there are numerous clips of him saying and tweeting he would start the process on Day One and it would be his first priority as President.

There. That’s done. Next!

That’s how Trump will handle this now. In public, he’ll move onto tax reform (expect a clip soon with him pondering “Nobody knew it was so complicated.”)

Or deficit cutting. (Expect a clip of him soon pondering, “Nobody knew it was so complicated.”)

Or negotiating a new treaty..

Hey, governing is hard and messy. Democracy is a very messy way of running things because people who elect other people actually have this crazy notion they are owed something for their votes.  An oligarchy is much easier or a dictatorship. I honestly think that’s what Trump imagined it would be like in the White House; That he could wave his hand and “Make it so”. He could proclaim, appear on the Papal… er Presidential balcony and bask in the love of the little people and then go play golf.

Governing is hard. It involves reading needlessly long and tedious documents put together by people who first language is bureaucratese.

I am not surprised by the failure of Trumpcare. The GOP spent 7 years complaining and campaigning against health care but never spent any time coming up with an alternative.

I’m not surprised at Trump’s failure to govern. We vote for politicians on the basis of looks and charism. We vote for extroverts and great speeches.  But when elected, we expect those same people to become serious policy wonks, who hit the books, burn the midnight oil, and don’t bother touching up their tan or whitening their teeth.

That old saying “You campaign in poetry but rule in prose,” is proving true.